Despite great progress, half of the world’s population is still at risk of malaria. That’s why it’s a priority for Goal 3 – target 3.3 is to end the epidemics of AIDS, tuberculosis, malaria and neglected tropical diseases by 2030.

So David Beckham is speaking up… in no less than 9 languages! Read on to learn how you can add your voice to the world’s first ever voice petition to help end Malaria.

In a new short film, David Beckhamlaunches the world’s first voice petition to end malaria for the campaign Malaria Must Die, So Millions Can Live. Instead of collecting signatures, the campaign asks people around the world to use the power of their voice to demand action by visiting malariamustdie.com and recording the message ‘Malaria Must Die’.

In the film above, David appears to speak nine languages as he invites people to add their voices to help end one of the world’s oldest and deadliest diseases. But the voices are not all his own. Instead, using emerging AI video synthesis technology, we hear David speaking the voices of men and women from around the world, including malaria survivors and doctors fighting the disease.

Through David, we hear nine global languages spoken and the voices of eight others, including Dr Elvis Eze, Marie Murorunkwere, Hussein Omar and Jean Bosco Niyonzima, who have survived malaria and are using their stories to help raise awareness about malaria’s devastating effects.

Dr. Elvis Eze whose voice features in the film speaking Yoruba, a language spoken in Nigeria said: “My life changed when I worked at a hospital in Lagos, Nigeria and I saw the intolerable toll of malaria. It doesn’t have to be this way. I now work for the NHS in the UK and have seen how this is a global challenge. Through the Voice Petition, we each have a chance to inspire change wherever we are”. 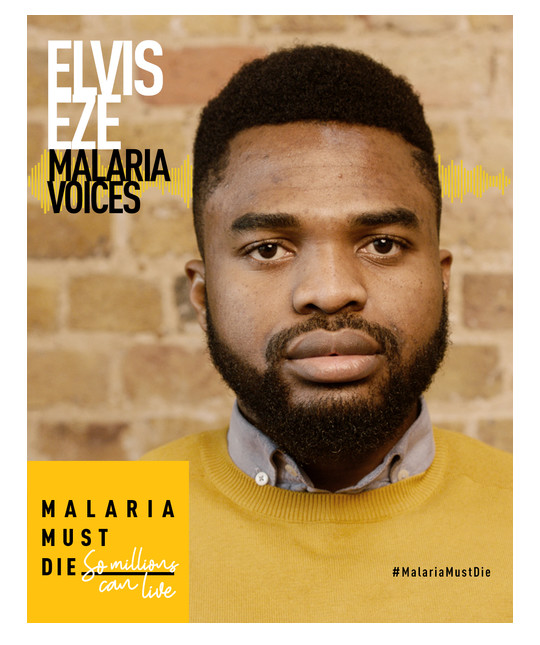 Each language and voice represent a part of the world affected by malaria, past or present; from the UK, which was historically affected by malaria, to China, a country on the brink of elimination, to Nigeria, where the malaria toll is the heaviest with close to 300 lives lost every day, mainly young children.

The ‘Malaria Must Die’ campaign is designed to amplify the voices of those affected by malaria and gives everyone the opportunity to speak out. Each voice collected via the petition will contribute to a unique piece of audio art known as a sound sculpture, grabbing the attention of leaders in a unique and memorable way. It will be delivered to world leaders ahead of critical funding decisions for the Global Fund to Fight AIDS, Tuberculosis and Malaria in six months’ time.

David said: “I have been working with Malaria No More UK for over 10 years and to be a part of this campaign and to help share some of the real stories behind malaria is really important to me. Dr Elvis Eze who was with us on set has suffered with malaria many times and as a doctor, he has seen how dangerous this disease can be. For me, it was so important to learn how he is using his experiences to raise awareness of malaria with young people in the UK and abroad. It’s unacceptable that malaria still kills a child every two minutes so please add your voice to the petition.”

History shows that ending malaria is achievable with the right resources and action. 150 years ago, all countries except in Antarctica had endemic malaria within their borders. Since then half of these have now successfully eliminated malaria, most recently Paraguay and Uzbekistan who were certified malaria free in 2018. Since 2000 a combination of powerful new tools, increased investment and strengthened international political commitment including from the UK, has cut malaria deaths globally by more than 60%, saving almost 7 million lives, mainly young children.

However, progress is not inevitable. History has also proven that malaria will return with a vengeance if not sufficiently controlled. The decisions made now by political leaders – backed by strong public support – will determine this trajectory.

Malaria Must Die is a global campaign calling upon leaders to prioritise the fight against malaria, or risk undoing decades of unprecedented progress. It aims to inspire support and build a strong mandate for bold political action to end malaria for good. Malaria No More UK is convening the campaign on behalf of the global malaria community.

So what are you waiting for? Your voice is powerful, so use it well. It takes a few seconds to say #MalariaMustDie but it could change millions of lives forever. We need to call on leaders to take action to end malaria – sign the world’s first voice petition to end the world’s oldest disease. https://www.malariamustdie.com/